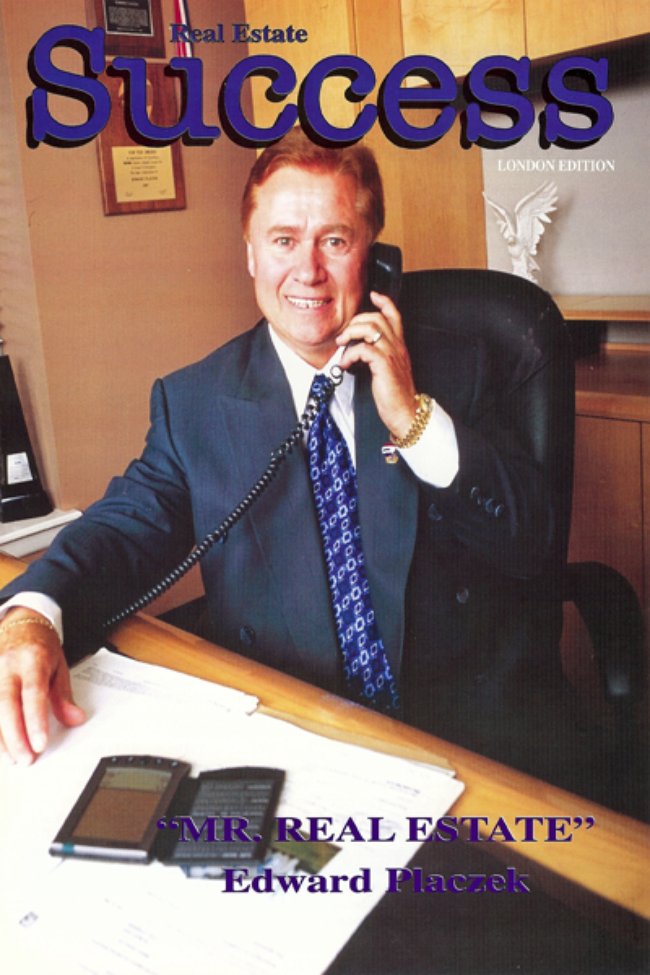 Man of Action
- Londonʼs #1 Negotiator -
If there is one thing Edward Placzek has never lacked in his life, it is the drive to embrace all the challenges that are found on any path to success. “I take my chances with life,” says Placzek, who has built a highly successful real estate career in London, Ontario since he came to Canada in 1974. He is of the nature that every time someone says he canʼt do something, he will prove that he can. Edward Placzek has become the most accomplished realtor in the past 30 years in South Western Ontario and has also been the top realtor in the London-St. Thomas Real Estate Board and is always in the top elite of realtors. Being an outstanding member of the community, Edward has earned the unofﬁcial title of “Mr. Real Estate,” and is often cited as an expert on the real estate market in London. He now has a team of three involving himself along with his two sons, Richard and Jeff Placzek. They all recognize that “each property is as much an individual as its owner”. Most people know that in real estate, the three most important elements are ʻlocation, location, locationʼ. The Placzeks would identify their three key ingredients to success as ʻmarketing, marketing, marketingʼ. Success comes with effective marketing and Edward believes the marketing strategy of the Placzeks has always been at the cutting edge of the real estate industry in southern Ontario. Edward also believes one thing that contributes to what sets him apart from other realtors is that “we [The Placzeks] provide superior service to all clients, regardless of the size of their home.”
The value of hard work and discipline is said to have been learned from Edwardʼs parents. Edward Placzek grew up in Poland and grew up in a family of ten during the Communist regime. He defected from Poland in 1969 after graduating from the University of Krakow. “He left Poland with a mission; to change his life for the better and take advantage of any opportunity the Western society had to offer.” For Edward, that mission would ﬁrst take him to Italy, where he lived in a refugee camp for a few months before heading off to Zurich, Switzerland and then to Stuttgart, Germany. Finally, ﬁve years after defecting from Poland Edward came to Canada, where he had an uncle living in London, Ontario. While waiting to come to Canada, Edward ended up meeting people from all over the world, which allowed him to gain invaluable people skills. “As my experience in meeting people of different nations and social make-up helped me in my career. I understood their needs, mentality and culture. This has been one of the key points in my success.” Edward started working as a realtor for Canada Permanent Trust in 1978. By the end of his ﬁrst year, he was the number one relator in a company of 100 agents. Then in 1983, Edward moved to Re/Max and within a year became the top-selling realtor and dubbed the “ﬁve-million dollar man,” having sold over ﬁve million dollars in real estate in his ﬁrst year. He has never looked back. Edwardʼs award-winning career with Re/Max made Edward the most accomplished and decorated realtor in 26 years with Re/Max in London.
Although Placzek has established his career and reputation as selling high-end listings, he welcomes any listing. “I never turn anybody down. There is no job too small or too big for me”. Edward was involved in various building projects between 1983 and 1988, consulting on a project that built 60 executive homes. Placzek has also represented several builders over his real estate career, resulting in a gain in valuable knowledge in terms of design and cost estimation. This helps when it comes to estimating the values comparing replacement costs, versus comparable sales, in terms of the ﬁnal price. In 1991, Edward along with his wife Carmen purchased a Re/Max franchise which became known as Re/Max Landmark Realty Inc., with approximately 50 realtors. Re/Max Landmark Realty Inc. grew to become the best performing ofﬁce per agent in London and was sold to Re/Max Centre City Realty Inc. in 1998. “Success doesnʼt happen. You plan it; Hard work gets easy if you love as I do.”
Homes big and small, we sell them all. Known for state of art marketing, honesty and integrity.
Selling properties with conﬁdence for top dollar no gimmicks, no auctions or purchasing your home
for cash; we sell it and you get the most of it because you are #1 with us!